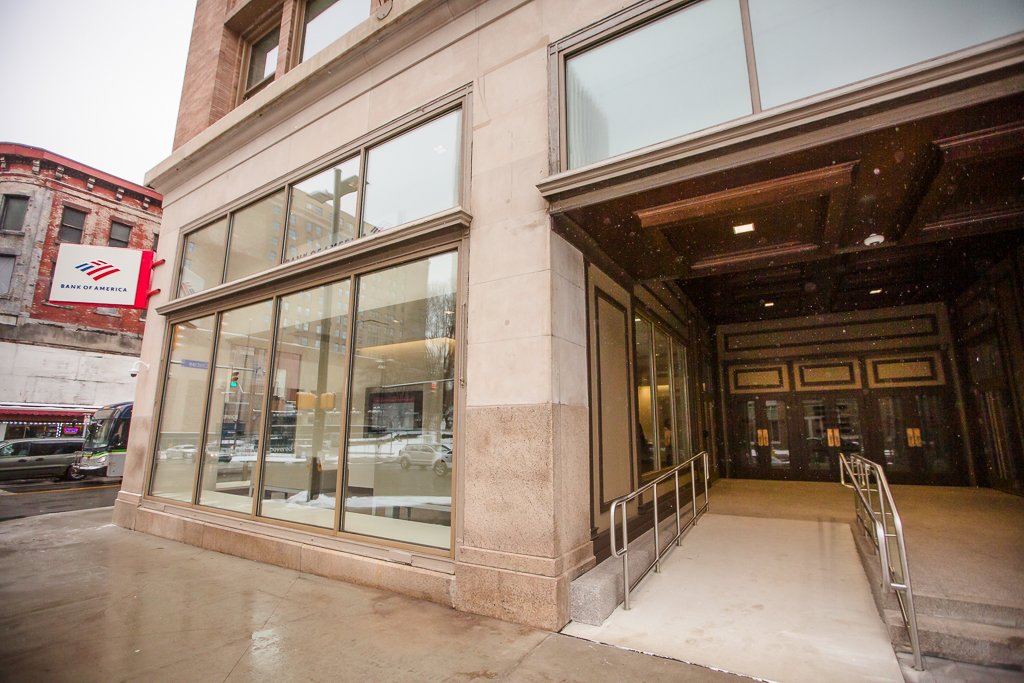 In opening a virtual financial center in Sibley Square, Bank of America has stepped out of the past and into the future.

While the company has 300 employees in the Rochester area, this branch at the corner of East Main Street and Clinton Avenue is employee-less. Customers can, however, connect face-to-face with a representative through the self-service kiosk. The video concierge then may direct customers to one of three private video conferencing rooms for more complex transactions or questions.

For customers looking to make a simple deposit, withdrawal or transfer, there are two ATMs that will be available 24 hours a day, seven days a week. Virtual services are available weekdays, and on Saturdays from 9 a.m. to 3 p.m.

It’s a drastic change from the cavernous space the bank had occupied a block away at 1 East Avenue. Inherited in Bank of America’s 2004 acquisition of Fleet Bank, the East Avenue branch featured 15 teller locations (though in the past year it was rare when more than two were staffed) as well as a host of desks and offices for banking associates.

“This goes back to what our clients are telling us,” said Colleen Matteson, Rochester market president of Bank of America. “Digital is how they want to interact. We wouldn’t have 36 million digital clients if this wasn’t what they wanted.”

The company’s digital integration began in earnest in 2018, when the bank introduced on its app “Erica,” an artificial intelligence-based virtual assistant.

While the bank has opened virtual financial centers in major cities over the past two years, this is the first in a smaller upstate market, Matteson said. Bank of America Corp. ranks second only to JP Morgan Chase & Co. in total assets, according to S&P Global Market Intelligence.

That they chose Rochester only makes sense, according to Laura Fox O’Sullivan, vice president and CEO of the Rochester Downtown Development Corp.

“We’ve gone from 108 innovation companies and creative-class enterprises to 195,” she said. “The people who work at these businesses will really appreciate this style of banking.”

It’s also appropriate for Bank of America to bring its latest technological advancement to Sibley Square, since the building houses NextCorps high-tech incubator on the sixth floor.

“Our downtown community is a hub of innovation,” said Matt Hurlbutt, president and CEO of Greater Rochester Enterprise. “We are a place where smart people live and smart people grow.”