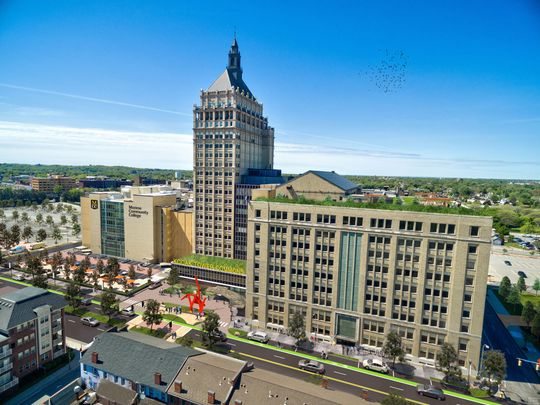 Major projects are transforming Rochester, but what's next?

There is no mistaking that Rochester is in the midst of a sea change when it comes to development.

Downtown is quite literally under construction.

The southeast side is grappling with a slate of project proposals, including the Cobbs Hill Village redevelopment, construction of a new apartment complex on a long-vacant lot at Goodman and Interstate 490, plans to reshape the Colgate Rochester Crozer Divinity campus, student apartments at Mt. Hope Avenue and Gold Street and a mixed-use concept for the old Rochester Psychiatric Center.

Rochester Regional Health is undertaking a $253 million expansion, its largest capital project in 60 years. Work is proceeding on a $50 million, 150-unit apartment complex on Hudson Avenue. Eastman Kodak Co.'s tower is getting a makeover, adjacent to the new Monroe Community College campus building.

"I work at the water bureau, and I review site plans," said Karl Waelder, chairman of the Highland Park Neighborhood Association. "We are seeing more site plans in the city than there has been in years."

All that begs the question: What's next?

The current spate of projects did not just happen. This has been a slow-rising wave.

We have torn down Midtown, filled the Inner Loop East, untangled Sibley, gotten the buses off Main. We have built Brooks Landing, College Town, CityGate.

Some pointed to the former Renaissance Square block on East Main between St. Paul and North Clinton. Or to Vacuum Oil, the remaining gap in development of the South River Corridor. Alexander Park is another major project in waiting.

Eastman Business Park has a plan. The port does not. "We want to get back to the table. We want to sit back down," said Baye Muhammad, the city's neighborhood and business development commissioner, referring to a planning process involving neighbors and stakeholders. "The numbers have to work (financially), but I want to get away from saying, 'It's got to be a hotel. It's got to be apartments.' "

Maybe transformation is more in the cumulative impact of many smaller projects than big ones. Some expect that will become increasingly true.

Said city spokesman James Smith: "I think it's not so much filling in, it's connecting dots." Or maybe transformation will come in other ways, local developers, planners and other experts say — through improved transit, co-ops and neighborhood-based economic development on a meaningful scale, be it through a coordinated plan for vacant lots or a means to encourage small-scale investment in mixed-used buildings along Webster, Parsells, Thurston, South Clinton, Lake and other arterials.

Maybe all this means that this city no longer has to always entice developers to build here, but can start — in some parts of the city — leveraging greater concessions from builders.

"The market seems to be working in southeast Rochester in ways that it is not working in other parts of the city," Waelder said, pointing to rising home values as a measure. "In some ways, it's not fair — but embrace it, in term of demanding" more from developers.

But it's important not to get ahead of ourselves.

Much of the current, major development efforts are half-finished. We still have to see what happens with Midtown's Parcel 5, and if a long-sought performing arts center actually gets built. There are plans for the Inner Loop but also questions. Construction is not expected to begin until the first half of 2018.

The largest is the Strong Museum's $105 million Neighborhood of Play proposal, that includes an expansion of the toy museum, a parking garage, hotel, retail and housing development. Strong's portion is nearly $60 million, and the museum is seeking up to $40 million in state aid, said Steve Dubnik, the museum's president and CEO.

Parking is key. For the project to move forward, he said, the museum must have at least enough money to build the garage. He is optimistic for a May or June groundbreaking.

"Delays in funding have not slowed us down yet," Dubnik said, though adding: "We will reach that stage this fall, where we would have to slow down or hold on the project unless we have some certainty in funding." The riverfront is another focus.

A new promenade and trail section is under construction near Dinosaur Bar-B-Que on Court Street, with a mixed-use housing project expected to follow.

And there has been talk of improving river access through downtown — drawing in the need to overhaul Genesee Crossroads-Charles Carroll Park — and into High Falls, which then melds into the Garden Arial proposal to build a series of gardens and footbridges over and around the falls and river basin.

The city has reconstituted its planning department and continues to work on a long overdue update to its comprehensive plan.

That is where Muhammad begins when talking about the future.

His to-do list includes many of the projects already mentioned, and adds a renovation and expansion of the Joseph A. Floreano Riverside Convention Center. There also are plans to revitalize the Blue Cross Arena at the Community War Memorial.

He points to development opportunities: a lot near Court and Exchange streets formerly used for Party in the Park concerts; a riverfront parcel off Andrews and Front streets belonging to Rochester Gas & Electric; or a 1.5-acre city-owned property farther east by Schiller Park.

In a statement, RG&E said site remediation work should be completed on the Front Street site this fall, after which the company "will assess its use or sale of the property."

Elsewhere, there is the question of what's to come of Bull's Head Plaza, a shopping plaza on West Main that the city bought for $1 million last month. And Muhammad notes the city's interest in continuing the removal and redevelopment seen on the Inner Loop East to the highway's northern section — hoping to push investment into the crescent.