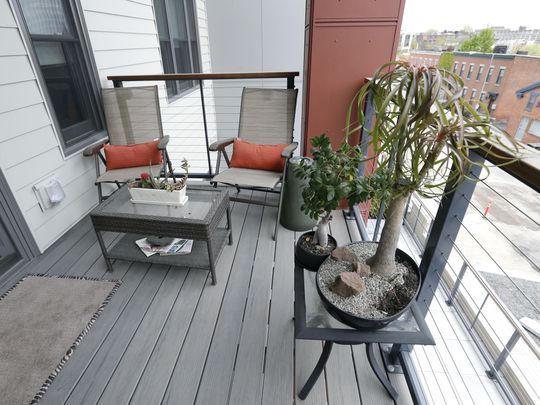 Katherine Samuels wanted a place to call home, something affordable in a location that would take in her two rescue cats, Sparky and Fred.

The 69-year-old settled on a one-bedroom at Wedgepoint Apartments, a $16 million project developed by PathStone Corp. opening earlier this year on South Avenue at the edge of downtown Rochester.

Rents start at $520 for a one-bedroom, far below the price of other new units in the downtown area.

"The others are like $1,500 or more a month," Samuels said in a recent phone interview. "A lot of them are going through the roof. You might as well live in a studio in New York (City)."

Hundreds of new rental units have come online in recent years, with thousands more in the planning stages or under construction. Since 2000, 48 commercial buildings have been or will be converted into residential uses.

Those conversions help to fill some of the roughly 1.65 million square feet in lost commercial spaces since 2014, according to Rochester Downtown Develop Corp. Those new units are expected to fill a strong demand cutting across demographics for downtown housing.

"The bulk of the market rate stuff has been rather high," said Heidi Zimmer-Meyer, president of RDDC. "A lot of the projects have more mixed income ... they have a blended set of income eligibility. They got a high-end market on one end and then they got more affordable units on the same property." In those newer projects, monthly rents often double and triple the $730 average rent in the Rochester area, according to apartment search site Zumper.

For example, a single bedroom with 912 square feet of space with such amenities as parking, utilities, concierge, rooftop patio and sweeping views of the city lists for $2,021 at Tower280, the high-rise connected to Midtown Plaza.

Work is continuing on the 12-story Sibley Square, a million-square-foot project being converted to retail, commercial and residential spaces by WinnDevelopment.

Two floors of the site will offer 72 units targeting mixed incomes of those 55 and older. Another 96 higher-end apartments include both one- and two-bedroom apartments. They start at $1,600 a month. A movie theater, game room, gym and concierge service are some of the features tenants will see in the project, Ed Cafasso, senior vice president of parent company WinnCompanies, said in an email. Preleasing begins this summer.

The Metropolitan, a 27-story mixed-use project, is still under construction with four residential units already filled and most of the rental units on the 17th and 18th floors already leased. Other units become available later this year, said Lauren Gallina, a spokesperson for the property.

On those two floors, rents start at roughly $1,200 a month from spaces between 600 and 1,300 square feet. Other prices, which include condos on the upper floors, have yet to be released.

"We haven't had any issues with the price points, most people think they are reasonable for the quality of finishes, the amazing views and brand new construction," she said.

Charlotte Square, 50 Charlotte St., brought 72 new one-, two- and three-bedroom apartments in the lower East End area over the winter. Rents start at just under $1,500 for 765 square feet, and include access to a fitness center, paid TV, internet, as well as private and outdoor terraces, and more.

Joe and Maria Paris are 50-somethings who recently sold their Chili home of 31 years to move into a 1,450-square-foot space with a wide-open kitchen, 2 bedrooms, 2 bathrooms, a balcony, den, and access to several common areas, fitness center and enclosed parking garage.

"It’s a lot of money for Rochester," said Maria. "It was time for us to move. It was too boring for us." They are now within a short walk to a grocery store, bars and restaurants and all the downtown festivals and events.

Roughly 80 percent of the units have been leased, said Susan Lenzo, community leader of Charlotte Square.

Even with the added stock, apartment vacancies downtown dropped to 2.1 percent last year, said Zimmer-Meyer, of RDDC. She expects the downtown population to increase by 3,000 when 1,726 units are added to the area over the next five years.

Single bedroom units continue to be the most popular, with college students, young professionals, empty nesters and "wealthy retirees" moving into downtown, according to RDDC.

"There is an apartment for everybody (downtown)," Lenzo said. "It's the perfect place." Affordable housing continues to plague metro areas across the country by many measures. Harvard researchers have found that renters across the country are now spending more than 30 percent of their income on housing.

They also discovered that about 52 percent, or 74,100, of all renting households in the Rochester area were burdened by the cost of rents.

Nearly 28 percent in the Rochester area were faced with a "severe cost burden." The pinch has only grown in recent years with rents increasing at a pace that "far exceeded" the pace of household incomes, according to commercial real estate firm Yardi Matrix.

"Now rents are peaking and have become difficult to afford for the average resident in many metros, while supply is at cyclical peaks," the report said. The biggest impact is being felt in metros that have heavy supply growth, and the effect is exacerbated when rents are above trend."

Perhaps the best example of the need for more affordable units in the downtown area was the Wedgepoint project.

On May 10, it had only four vacancies, with more than 200 placed on its waiting list, said Joshua Sankowski of PathStone Corp., which is managing and helped develop the project with several community partners.

PathStone has been working on a $9.7 million project in Gates, in addition to the $16.6 million Alexander Commons project near Monroe High School and just outside the downtown area.

Both promise affordable rents for households at or below area median income levels.

"The need for affordable housing is so great that the demand is exceeding what is available right now," he said. "It's definitely a need right now that (extends) throughout the county."