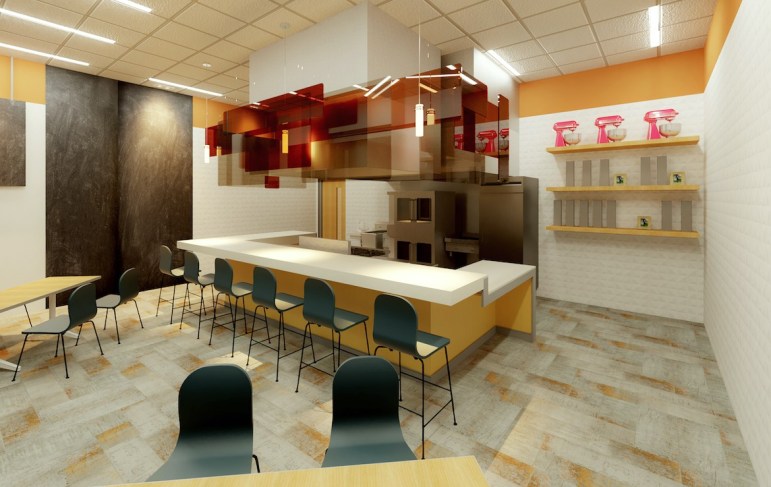 Luis Carrasquillo dreams of supplying a food from his childhood to large numbers of businesses or people.

“Our main goal is to produce, and to be the biggest wholesale distributor of, empanadas in our side of the world,” says the founder, president and CEO of Munchies Mpanadas LLC.

The Commissary: Downtown Kitchen Incubator could give Carrasquillo the setting, equipment and assistance he needs to make his dream come true.

Once it’s completed, budding food entrepreneurs and the owners of small businesses will have the chance to use the Commissary’s equipment, and the expertise that it offers, to learn how to make saleable food products on a large scale. If all goes well, the nonprofit facility could open its doors mid-June. Space will be available to rent by the hour.

RDDC set out to create the Commissary to help the local food industry grow at a grassroots level.

“Our primary beneficiaries are going to be people who either want to launch a food business that at this point is just in the idea phase, and people who have an illegal home-based food business and are looking to grow … and legalize it,” says Laura Fox O’Sullivan, vice president of RDDC and president of the Commissary. She leads its board of managers.

Those who might not otherwise have much of a chance to turn recipes into saleable food products on a large scale are particularly welcome to become members of the incubator.

“Something that is very central to our mission with the Commissary is providing business ownership opportunities for the lower-income members of our community,” Fox O’Sullivan explains. “The food industry is an industry where if you have the support that we can help provide, and you have a talent, and you have a passion, you can succeed.”

RDDC aims to bring a range of entrepreneurs and businesses into the Commissary.

“The types of food businesses that we generally say that were going to have are caterers, food trucks, packaged-food goods, bakers and pre-startup restaurants/virtual restaurants,” Fox O’Sullivan explains.

According to one report, over half of the tenants of U.S. kitchen incubators were women-owned businesses, and nearly a third were owned by members of minority groups. Fox O’Sullivan says that the Commissary will strive to attract such businesses, and could better those numbers.

“Based on who’s calling me, who’s emailing me, in addition to who’s taking our online survey expressing interest, I think that that’s going to be true,” she says.

Empire State Development will be watching those numbers. The agency has pledged $213,500 to help cover the Commissary’s startup costs.

“It was directly in line with our efforts not only to revitalize downtown Rochester, but to continue to create public-private partnerships that spur innovation and entrepreneurship,” says Vincent Esposito, ESD’s Finger Lakes regional director. “Not all incubators and innovations are tech-related or software-related, and there are other businesses that we want to help encourage to grow and commercialize, and to be part of our transformed regional economy.”

The terms of the ESD’s grant call for 30 percent of the funds to be spent on certified minority or women-owned businesses.

In addition to state funds, the Commissary also has received $982,000 in federal monies, $20,000 from the Rochester Economic Development Corp., the city’s economic development arm, and other financial support. By mid-February, 170 people had expressed interest in using the food incubator and its services.

Those wanting to start food production businesses face a host of hurdles. Before they consider turning on a stove or oven, they need to answer some questions.

“Is there really a demand in the market for what you’re doing?” says James Senall, president of the nonprofit tech incubator NextCorps, which also is located in Sibley Square. “Are you providing (customers) with a value proposition (so) they would buy your product over somebody else’s?”

When the products involved are foods, those answers can be tough to find.

“It’s really preferences and tastes more than anything else, so taste testing and getting feedback from customers as you’re refining your recipe, I would imagine, are all things that would be important,” Senall adds.

Then, the startup or small business must have all the documentation needed to satisfy various government agencies.

“They’re going to need assistance in understanding which permits and documents they need to be considered a legal food business,” Fox O’Sullivan explains.

The complete list includes an IRS employer identification number (also known as a federal tax identification number), a food-processing license from the U.S. Department of Agriculture and proof of general and product liability insurance. Those wanting to sign on with the Commissary—and become members—must have all that documentation in hand before the nonprofit will accept them.

Beyond having to obtain the necessary paperwork, a startup or small food production business must make sure that the site in which it intends to create products, and the processes and packaging systems it will use, meet New York State and Monroe County Health Department food safety regulations.

“In order to produce a food product, you need to make sure that it’s safe,” says Catharine Young, executive director of the Center of Excellence in Food and Agriculture at Cornell AgriTech. “There are pathogens that can get into food products. Listeria is a big one.”

Listeria, a foodborne bacterial illness, can be hard on pregnant women, and for those who are older than 65 or have weakened immune systems. Serious cases can lead to bacterial meningitis, a life-threatening complication.

In addition to meeting government regulations, those who want to start or expand a food-oriented business have to come up with the necessary capital.

“(It’s) really expensive, once you sign a long-term lease, doing the buildout work, (and) purchasing the cooking equipment that you need,” Fox O’Sullivan says.

Carrasquillo already sells his wares at Munchies Roc City Empanadas, his North Clinton Avenue restaurant, and at a number of other locations, but wants to ramp up production. For that, he will need industrial kitchen appliances like a “blast freezer,” which is used to preserve food products.

Luis Carrasquillo hopes to use the Commissary to grow his business. “It kills the bacteria on contact,” he says. “A blast freezer alone can cost you $40,000 just for a small one.”

Fox O’Sullivan says that the initial cost of starting a food production business can reach as high as $100,000, an amount that’s beyond the reach of most small firms and entrepreneurs. In addition, many entrepreneurs have great ideas for businesses, but are not prepared to make their ideas work in marketplace.

“A lot of these entrepreneurs lack a business plan,” says Ebony Miller-Wesley, director of the Rochester Institute of Technology’s Center for Urban Entrepreneurship.

They may also lack important skills, such as the ability to forecast how well their businesses might do financially in the future. That skill can be particularly important for someone who hopes to successfully operate a business after it leaves the Commissary.

“They’re going to have to be able to afford a market-rate rental somewhere else,” says Miller-Wesley, who also is a board member at the Commissary. “If they don’t understand their numbers, they could essentially end up having to close their doors at some point.”

Those who head new or expanding companies also will have to be able to monitor and respond to changes in those markets.

“Be forward-thinking, and think about what’s trending, what people are asking for, and are you able to address that,” Miller-Wesley explains. “This person might love your cupcakes, but what if they want a carrot cake for a wedding? Do you have the ability to make that?”

The Commissary plans to offer some of the assistance members will need to deal with such problems, and more. The site itself will have food preparation areas, industrial kitchen appliances—stoves, ovens, freezers and the like—and cold and dry storage areas. Members who want to test their products on the public and host events will be able to do so in the Commissary’s Performance Kitchen. In addition, there will be classes and workshops on important topics.

“How do I scale up a recipe from my home kitchen to a commercial kitchen, going from five quarts of a product to 40 quarts?” Fox O’Sullivan says. “How do you get a UPC code?”

UPC codes, which adorn just about every item that is commonly sold, identify those items.

The Commissary will bring in those who have knowledge of the food industry, and of other important subjects, to give those classes and workshops, including professionals from the Cornell Food Venture Center. Plus, mentors selected for their knowledge of food production will offer individual help to entrepreneurs and business owners.

Frank Cavallaro, the COO of Ithaca Hummus, which makes and distributes its own brand of hummus, will be one of those mentors. Cavallaro, a former vice president with the Fairport-based food and beverage manufacturer and distributor LiDestri Food and Drink, has spent decades in food manufacturing. He plans to offer the Commissary’s members the benefits of what he’s learned during that time.

“Somebody has trouble making something super-thick, or a product is breaking down, I can help them with ingredients, or suppliers with certain ingredients that might be able to help,” he says.

Cavallaro says he could also help members with packaging problems, and refer them to local attorneys and insurance specialists who might be able to help them set up their businesses.

There will also be instruction on more business-related matters. Miller-Wesley and her CUE cohorts will provide some of that assistance in the form of workshops and one-on-one assistance. That should be fairly easy—CUE is located right next door.

“It doesn’t cost you anything to come here and sit down with us one-on-one for coaching,” she says.

“We anticipate being able to admit between 30 and 50 businesses in our first year of operations,” she says. “By year three, I think we could be up to 50 to 75.”

With few exceptions, all will have no more than three years to accomplish their aims and move out of the Commissary—Fox O’Sullivan calls it “graduating.” Their businesses’ progress both before and after they leave the nonprofit kitchen incubator will help determine whether the Commissary is successful.

“How quickly can they graduate out? How much have they invested in their businesses?” Fox O’Sullivan says. “How many people are they employing? At a certain marker, are they still in business? Are they still growing?”

Carrasquillo sees membership in the Commissary as a way to propel Munchies Mpanadas forward.

“Our main goal is to become a wholesale and distribution company,” he explains.

An empanada is a pastry that’s been stuffed with meat, cheese, corn or other ingredients, and then baked or fried. As a kid growing up in Rochester, Carrasquillo watched his mother make them by hand in his family’s kitchen.

“My mom used to do it with her sisters, and friends,” he says. “They used to cook for the whole family.”

Twenty-five years ago, he began making his own empanadas for retail sale. Nowadays, five of his family members—including his mother—make his own tasty wares as needed. While some of their output goes to those who patronize Carrasquillo’s 850-square-foot restaurant, Carrasquillo also sells empanadas to local grocery chains and businesses, including the Seabreeze Amusement Park.

Seeking to expand his business, Carrasquillo is preparing to move it into a 1,500-square-foot space on Chestnut Street in March, and plans to have a food truck ready to hit the road that month. While both efforts could prove fruitful, he’s really looking forward to moving his two empanada machines into the Commissary when it opens. Once he has done so, he should be able to produce the foods for other distributors under contract.