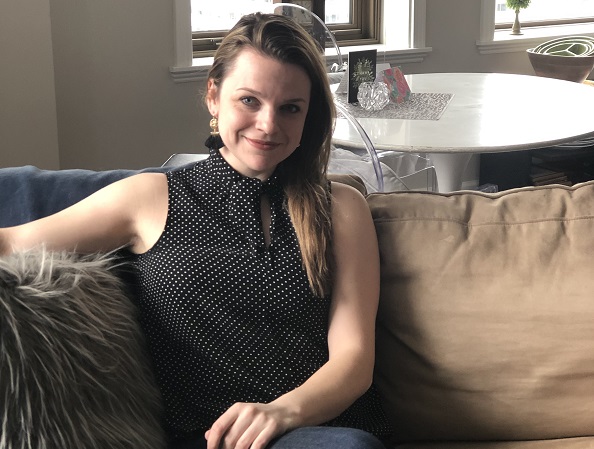 When Grace Browning arrived in Rochester from Dallas last year, she was looking for an apartment that was within her budget, was close to work and had some common amenities. And it had to be dog-friendly.

“I couldn’t say exactly what my dog is because she’s a rescue. One place I was looking at, they were like, it looks like she might have some Pitbull,” Browning, 32, recalls. “If you don’t want my dog then I don’t want you.”

So Browning kept looking, and eventually found herself in the heart of downtown at Spectra at Sibley Square, where she and her dog were welcomed with open arms. Her 10th-floor apartment overlooks Main Street and Parcel 5, the Metropolitan, and she can see the Eastman School of Music, which she attended more than a decade ago.

“I’ve had to live in a lot of different cities as a musician. As a harpist, you have to go where the jobs open,” Browning says. “When RPO announced a harp opening a year ago, I knew I wanted to live here. I was thinking, what is Rochester like these days? I wasn’t expecting to have a place like this available to me.”

Like it or not, each generation has an impact on the things we buy, when we buy them and how. Millennials—and their effect on the real estate market—are no different. Millennials know what they want and they refuse to accept anything else.

“The younger generation of millennials is attracted to paying for what they need when they need it, not having it in their house (all the time),” said Ken Greene, asset manager for Sibley Square. “The older millennials I think are still tempted by that American Dream of homeownership.”

But Browning was different, primarily because of her need to be able to pick up and leave should the job require it. And she had learned the hard way that a house just wasn’t for her.

“I did live in a house my last year in Dallas, and after that experience I realized I wanted something simpler, something where there’s no maintenance required of me,” she acknowledges. “But also, after living in a house I realized it does sometimes get a little bit lonely. As a young, single person you want to be around people.”

And that may be the crux of how millennials are impacting the real estate market, some experts say, whether they choose to rent or to own. Location, i.e. proximity to friends and family, is one driver of the millennial housing market; they are looking for a sense of community.

“One of the things I really love about this is I’ve been able to meet some wonderful people who live right downtown,” Browning says. “Another nice thing is that now that I’m meeting people in the community I’m discovering that there is this new, young downtown community that consists of a lot of other artists or creative types.”

Young homeowners also are looking for that sense of community.

“All our friends are still here,” says Mike Yacuzzo, who recently moved from East Rochester to a home in Gananda. “So we definitely didn’t want to be any further out. Being close to everyone where we can still hang out was a big deal.”

And like Browning, one of Yacuzzo’s must haves was a place for his dog.

“The huge one for us was we have a 100-pound German Shepherd that’s three years old, so we needed a yard for him, definitely,” he says. “That impacted where we could even look.”

At 27, Yacuzzo was looking to the future when he was house shopping. Room to grow was a must, which included the big yard, as well as an extra bedroom and bathroom should his family grow. But not all millennials think that far ahead.

“Younger millennials want less space that they have to pay for and they want access to space that’s customizable,” Greene says. “‘I don’t need a big kitchen. I just want to be able to have GrubHub deliver my food.’ They want the availability of a theater every once in a while when they want to use it, or they want the ability of having a party, so maybe it’s on the rooftop deck or maybe it’s in the reception area that they can reserve.”

And with the so-called “gig economy” that millennials live and play in, their calendar looks different than that of Generation Xers or Baby Boomers.

“They don’t live on the same calendar; they live in a 24-hour-a-day world,” Greene explains. “I can get home at 10:30 at night and take my dog to the dog park; I can go to the gym and work out. I don’t need to have any of these amenities in my apartment.”

Perhaps influencing that notion is where millennials were raised, he surmises.

Key drivers in the millennial housing market include jobs, affordability, experiences, room to grow and neighborhood attributes, a report from Roofstock shows. And when it comes to affordability, student loan debt plays an important role.

A recent Bankrate survey shows that with student loan debt totaling $1.5 trillion in the U.S., millennials are forced to put off important financial and life milestones, including buying a home. Some 23 percent of survey respondents said they have delayed buying a home because of their student loans.

Realtor.com also notes that millennials make lower down payments on homes and purchase less expensive homes than their baby boomer counterparts, which means they take on larger mortgages, adding to their debt load.

Millennial renters, Greene says, are making better financial decisions that are driven by logic, not by emotion.

“And they have a higher level of demand of the experiential things they’re willing to pay for,” he adds. “It’s all about renting something you need when you need it, not feeling the need to own or control it all the time.”

Howard Hanna licensed real estate salesperson Jill Bates says 85 percent of her home-buying clientele comprises millennials. Millennials hold the highest share of home-buying activity out of all of the generations, she notes, a statistic that has held true for five years. More than one-third of all home purchases in 2018 were made by millennials, she says, citing National Association of Realtors data.

“They’re intelligent, educated, but they really rely on an expert, and in home buying it’s a real estate agent,” Bates says.

Many of her clients qualify for first-time homebuyer’s grants and programs, she adds, making the prospect of owning a home even more enticing.

Like millennial renters, Bates says her clients tend to look for neighborhoods that are close to family and friends. But they also are looking at the quality of school districts when they search for homes. Off-street parking is important to Bates’ millennial clients, as is a yard for pets. And two-story Colonial-style homes seem to be the norm among young homebuyers, she says.

While the impact of millennials on the real estate market is profound, one attribute stands out as a game-changer when it comes to buying and renting: the internet and social media. The ability to research apartments, houses, neighborhoods, schools and entertainment venues has enabled millennials to get a leg-up on where to look when searching for new digs.

“Millennials look at homes on the internet using sites such as Zillow, Realtor.com, RedFin. This allows them to eliminate homes that do not match their criteria, which saves time,” Bates says. “One of my clients last fall was concerned that the first house he actually looked at was the only house he physically looked at and asked me if he should look at more. I reminded him that he actually looked at many houses on the internet; he was then comfortable purchasing.”