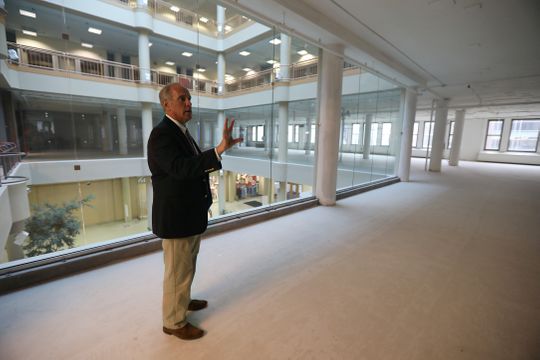 The glass walls frame out an expansive, 25,000-square-foot office space on the second floor, just beyond the escalators.

It is from this vantage point that WinnCompanies' Ken Greene lays out the vision for this 1-million-square-foot downtown landmark that he says is "bigger than the sum of its parts."

He touts the synergy of a developing "innovation, education, incubation" tenant mix. High school to grad-level students can co-mingle with culinary, high-tech and other entrepreneurs. Winn announced it had hit the halfway point in renovation at the start of the summer, having invested more than $100 million. By the end of next year, Greene expects to have all but 100,000 square feet leased or committed.

That's an aggressive schedule and a significant turnaround. It would give a major boost to the Center City, with Sibley Square being the single largest downtown structure.

"There is an emotion wrapped around this block that I don't think is the same for other properties," said Heidi Zimmer-Meyer, president of the Rochester Downtown Development Corp. And its turnaround, "adds to the dynamism that's growing on what feels like a weekly basis.

"It's starting to snowball," she said. "And the sheer size and scale of Sibley ... their success and leasing is that much more impactful."

Greene claims to have had multiple visits on this 25,000-square-foot, second-floor space from what would be a new-to-the-area high-tech firm. He has two letters of commitment for street-level spots downstairs, he said. And he is in talks with an accounting firm, two law firms, and a yet-to-be-named charter school.

But what he wants to talk about on this day are new tenants.

The Winn-funded @SibleyWorx shared workspace opened downstairs and leased up in 45 days. Rochester Institute of Technology's City Art Space gallery and event center is under construction, expected to open by year's end. Organizers hoping to open an adult high school are working through certification and funding, expecting to welcome its first class into a portion of the former Monroe Community College space next summer or fall.

A video game development hub, Roc Game Dev, is busy preparing its space and plans to open this fall.

There are plans for a marketplace in the atrium, with up to a dozen booths offering freshly prepared food. Greene also touts a proposed demonstration kitchen and shared commissary and a concept for a 1,600-square-foot vertical greenhouse (the equivalent of 3 acres) that would act as a classroom for city schoolchildren.

And it doesn't include the apartments — 176 completed thus far, with fewer than 10 yet to be rented. Construction on a remaining 103 units could begin yet this year, or early next. And Winn, partnering with another downtown business owner and developer, was awarded a purchase offer last month for the nearby Mortimer Street parking garage.

There also are departures, as Greene noted that Rainbow Shops' lease expires in the coming months. Developers have yet to settle on how to repurpose that space.

It has been an evolution, getting to this point, after the apparent setback of losing MCC. NextCorps provided the springboard, Winn officials say of the University of Rochester-affiliated group formerly known as High-Tech Rochester that bought and opened a sixth-floor incubator space. The apartments created the momentum.

Boston-based WinnCompanies is about 10 years into the redevelopment. The developing synergy at Sibley — with incubators expected to pump out future tenants — is a microcosm of the Downtown Innovation Zone, which is starting to hum and now boasts 174 tech companies.

As for what's next: Gidget Hopf, president and CEO of the Association for the Blind and Visually Impaired-Goodwill Industries of Greater Rochester, said the planned Excel Center would allow adults to earn their high school diploma and become college ready or receive industry credentials in high-demand areas including banking, optics, information technology and pharmacy.

So far, $1.5 million has been raised toward startup. But organizers are seeking state education funding for a $2 million-a-year, five-year test program, providing both education and workforce development with certification.

"The goal was to open about two years ago," Hopf said. "We keep pushing out the date because it has been such a struggle to get to this point. Everyone we talk to is supportive and wants this to happen. It's just things don’t get done very quickly."

The commissary, a concept being developed by the Rochester Downtown Development Corp., still is negotiating a lease and finalizing funding, with an eye on opening in 2020. They already have a wait list of 152 food entrepreneurs, Zimmer-Meyer said, from food truck operators and caterers to bakers and startups.

Over in @SibleyWorx is Frank Cavallaro, a food manufacturing veteran now with the Ithaca Cold-Crafted hummus company, who will serve as a mentor. And the food market will have a booth set aside for those ready to test their fare.