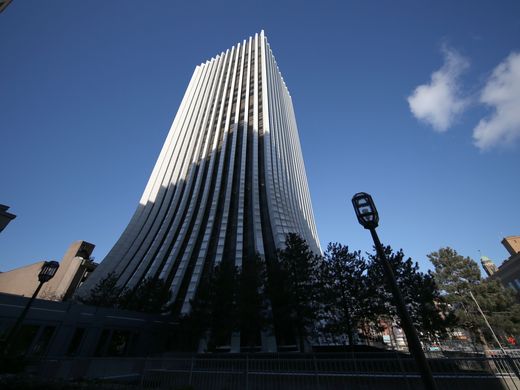 Walk downtown these days and you will hear the sound of construction. Beep. Bang. Rumble. Whir. East Main Street itself is a work zone. And buildings on either side are fenced, barricaded, boarded or adorned with a dumpster.

There are renovations ongoing or upcoming at Sibley Square,88 Elm, the former Chase Tower (now The Metropolitan), at the Hyatt Regency, Lincoln Alliance Building, the former McCrory's building and the old Atrium and Gateway buildings. Plus there is planned construction at Parcel 2 and an envisioned mixed-use development anchored by a Broadway theater on Parcel 5. It's an impressive list, covering just four blocks along East Main. But projects alone are not going to change downtown.

"In terms of changing landscape, I look at the Hyatt with their significant announcements for Starbucks and Morton's (high-end steakhouse)," said Scott Burdett, vice president of marketing and brokerage services with Flaum Management Co.

Burdett isn't alone in pointing to those two national chains as the most significant investments being made downtown. Retail follows rooftops, so the importance of the growing and diverse residential population filling all those projects is not to be overlooked. It's that there has to be a tipping point.

“Retail is like a lemming sort of business," said Lewis Norry, CEO of Norry Management Co., and part owner of the McCrory's building, which is actively looking to fill a first-floor retail space. "Somebody has to take the risk, and everybody knows what (market) profile everybody else is looking for. … So once Morton's is there, there are other people who wouldn’t listen to you before who now will listen to you.” It was roughly a year ago that Burdett and other local real estate experts were part of a panel at the downtown Bausch+Lomb library that focused on whether the downtown market was ready for retail. One line of discussion was that the demographics of downtown, who filled all the apartments being built or renovated, would shape what retail would follow, and thus the flavor and future of the Center City.

"If you had asked me 12 months ago, what are the chances we would have a national steakhouse opening in downtown Rochester, I wouldn't have given that a high percentage," Burdett said. "That is not necessarily driven by the residential population, and more by hotel development." What has emerged on the residential side is difficult to define. Consider:

► For the 14064 and 14614 ZIP codes, which encompass much of the area inside the Inner Loop, the typical resident is in her 30s, white, lives alone, and makes less than $20,000 a year, according to data from Claritas Market Insights.

► Overall, the population is 49 percent white, 41 percent black and 17 percent Hispanic or Latino. More than a third are between the ages of 25 and 44, but one in five are 55 or older, data show.

"We're seeing it across all segments (of downtown)," said developer Tom Massachi, co-founder and managing partner of DHD Ventures, who has downtown projects on both sides of the Genesee River. "There is not one defining type of tenant. It's all over the place.

"It's a challenge trying to figure out what the market wants."

The blend of incomes and ages, of young professionals, artists, mid-career executives and retirees, has made downtown "one of the most diverse neighborhoods in the region," according to Rochester Downtown Development Corp. Those without children still dominate the Center City population, said RDDC President Heidi Zimmer-Meyer. But, "we are beginning to see more baby strollers and there are children, because we see school buses stopping in front of buildings."

The city has tried to attract homeownership to the Center City, with little success. The city's Choice Program had enrolled just 36 homeowners over the past decade, granting tax breaks for properties with an average assessed value of $316,840 — more than twice the median home value for the region. Currently, more than 96 percent of housing downtown is rental, according to the city. Demand for housing continues to grow, according to a recent market survey by Rochester Downtown Development. Vacancy stood at 2.3 percent in 2015. Conversion of 48 buildings to mixed-use/residential have begun or been completed, plus nine new projects.

High-end units with amenities are going quick, where the middle-market units are harder to fill, Massachi said. There is demand for more bedrooms, presenting a challenge to get financials to work as developers can push more studio and one-bedroom units onto a floor than two-bedroom.

An estimated 7,000 people live in the Center City, with RDDC projecting 3,000 will move in over the next three or four years.

Claritas data is less optimistic. Population growth in 14604 and 14614 — which increased by 7 percent for 2010-17 — is projected to slow to 4 percent over the next five years. These measures are inexact, however, leaving out 14607, which encompasses the easternmost edge of downtown and extends to Culver Road.