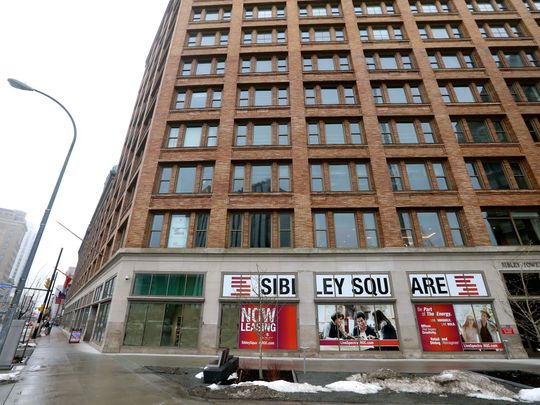 As the new asset manager for Sibley Square, Ken Greene was charged with the task of commercial development. Among other duties, that means seeking food businesses to fill the atrium of the million-square-foot building. He decided to scout local food trucks to see which ones had the longest lines. Then he approached those with a business expansion proposition in the heart of downtown Rochester.

A thriving food court is now in the works at Sibley Square on Main Street as it enters its next phase of development. With all 176 residential apartments completed and half of them leased, the focus is now on the commercial side.
"We're seeking to curate a city within this building," Greene said.

The structure that was built in 1904 to house Sibley, Lindsay & Curr Co., a department store, is getting a new life as a mixed-use urban center as envisioned by Boston-based WinnDevelopment. So far, the company has spent — with the assistance of tax credits — $100 million on redeveloping the property, with more than half of the building completed. New windows have been installed as well as over $1 million spent on security systems, Greene said.

The Sibley renovation is projected to cost $200 million when it's all said and done. To celebrate completing the residential portion and its amenities, WinnDevelopment plans a ribbon-cutting ceremony in February.

The residents may use the amenity spaces at no extra charge. There are a full gym and a spin room, a large lounge area for parties and a theater room as well as a boardroom for meetings. The indoor and outdoor dog park is set to open in the pet-friendly complex, where there are now six dogs. There's also an indoor play area for children.

As WinnDevelopment is ready to move toward leasing and developing the commercial side, the historic boardroom is refinished and ready to lease out. Greene says it could be a law office boardroom or a principal's office for a charter school. The developers are also currently leasing shared workspace, a trend in the work-life sector of business, Greene said.

Before his foray into real estate, Greene was the owner of Rochester-based Flour City Bagels, the largest franchisee of Bruegger's Bagels. He sold his interest back to Bruegger's Bagels two years ago and formed his real estate firm before joining WinnDevelopment.

As a former restaurateur, Greene understands the challenges of the industry as well as trends. He says he has eight small-food-business owners ready to sign on to Sibley's food atrium concept.

The current food trends are local and ethnic. The new eateries will focus on those concepts, with breakfast, lunch and dinner offerings and likely a place that serves adult beverages. Fast-casual is also a major trend in the food industry, and the atrium will be an alternative to the other offerings downtown such as Morton's Steakhouse, he noted.

Frank Cavallaro, the chief operating officer of Ithaca Cold-Crafted, will be moving his company's headquarters to Sibley Square in March. He likes the city within a city concept and looks forward to the food atrium. Ithaca Cold-Crafted is a food company that sells hummus.

"It was right up our alley in terms of our future," Cavallaro said. "It's great to be downtown."